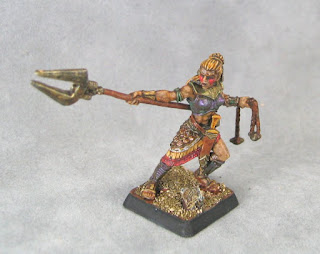 For the current "Death and Discord" WarGods campaign June reinforcements I rolled up an Amazon Manhunter character. Cool, she will be awesome. But there's no miniature for her yet. Luckily I'm a lover of converting minis so I sifted through a metric ton of bits to find stuff to use for it. I'm happy with how she turned out and can't wait to see what she can do on the tabletop.

I decided to use an Amazon Peltast figure for the body mainly because I liked how she was holding her javelin out. I found a nice stand-in bit for her mancatcher. 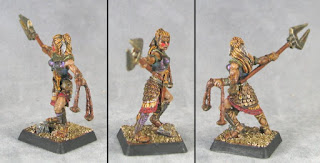 The discus on her belt is just a slice of plastic rod that I whittled at an angle to make it look right. I got her left hand from a Basti skirmished and added a couple of Wargames Factory Amazon slings to act as her bolas. 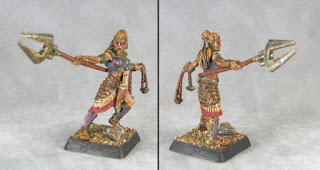 Tragedy struck while I was doing the basing- gravity is a harsh mistress. The mancatcher was bent but the pin held. Sadly the front bola broke off and is lost so I attached another and reinforced it with some UV resin, hopefully. 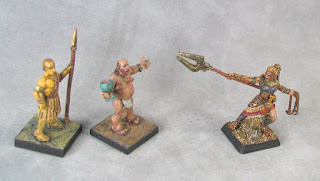 Finally, here we see Clio the Manhunter confronting the Sleazy Merchant and his guard. This won't end well for those guys...