Forge of Ice February is About to Begin!

With the arrival of the Eye of the Cyclops Kickstarter minis last fall my inventory of Forge of Ice miniatures got a major boost. This surmountable amount of miniatures will be an easy win on the plus side of painting stuff. How likely it is that they're all going to be completed by the end of February is an open question (let's ask the partially painted peacock who has sat in that state for too  many years).

The plan is to paint up as many of these miniatures from Forge of Ice as I can throughout February and do a wrap-up showcase at the end. Why February? Well it's the only "F" month so it works itself out. 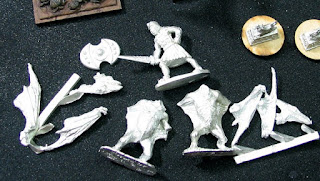 Let's first look at the minis that have yet to be put together and freed from the curse of their integral bases. One of the cult guards (this one I decided to give the optional shield to) and two of the excellent-looking pterromen who need some pinning for their heads and wings.

Next are a couple of partially painted things from far too long ago (that could be said about a bunch of minis I have). A large 40mm scarab swarm (I think I have another that was already finished) and the aforementioned peacock strutting around like he owns the place. 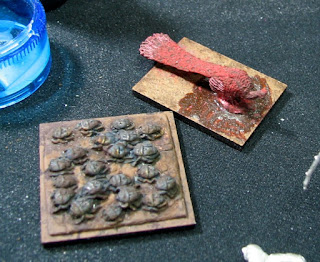 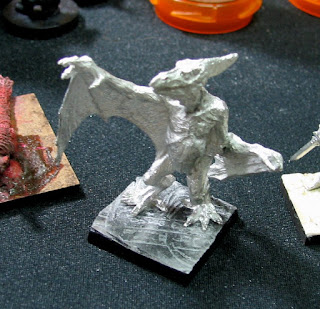 Here we have the third pterroman assembled and on his fancy base. I made a mold of some Egyptian terrain piece mural of seated figures specifically for one of the pterromen to stand on becuse I think it will be pretty cool.

Next are 3 members of the Cyclops cult from the Kickstarter. The female guard captain (maybe my favorite figure from the Eye of the Cyclops), Kandar Itaa (the priest of the cult), and one of the regular guards (I left the optional shield from this guy because I think it will look better). 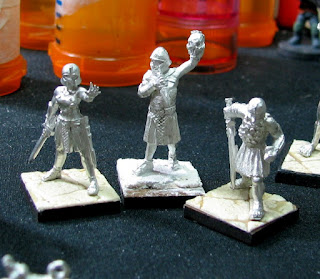 Here's an assortment of objectives/scatter and a nasty lizard. I've painted up one of the jumping boar arks before but I've got a different idea for this guy. 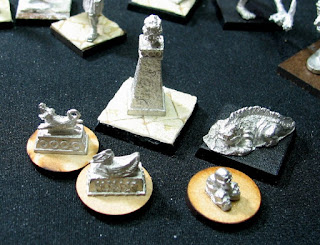 The Okroi pack animals were originally planned to have magnetized packs but I've decided that's way too much trouble. If I really want some of them without packs I can just order them. We'll see how they paint up. Their bases are 2 20mm bases pinned together to make the perfect 20x40mm base they deserve. a regular 25x50mm base looked too big and a 25mm square base had them at an awlward diagonal. This 20x40 looks perfect to me. 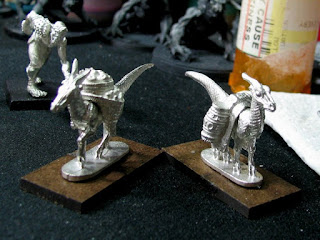 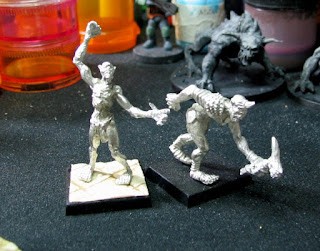 I can't believe that I almost forgot about the big mammoth cyclops skull centerpiece! This thing has been sitting by the side of the painting table since I got the Kickstarter package. It's a wonderful resin piece. 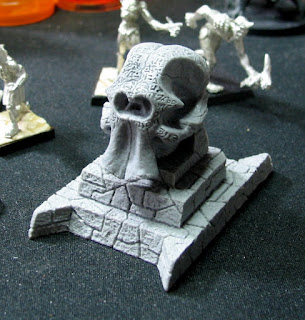 So there they are- the 18 Forge of Ice minis I have to be painted throughout the month of February. I do have a few tiny accessories form Forge of Ice like a paleolithic Venus figurine, some various shields, and a couple of prehistoric daggers in my bits box. These will be saved for just the right project whenever it comes along.
If you've got some forge of Ice minis you should really think of painting them up in February and posting on Instagram under #forgeoficefebruary because it would be nice to see other peoples' paint schemes for these great miniatures.
Posted by Clarke at 8:31 PM No comments: