WarGods Minis Month continues (long after the conventional 30 day definition of "month") with The completed magnetized horses for the Amazon Raiders and a majestic Sphynx! 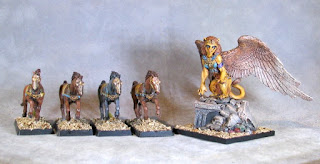 Above is the grey one. Below the darker brown one.

Here we have the medium brown two, they're basically the same colors except on the reins and stuff. All of these horses have multiple coats of gloss varnish on the saddle area (followed by a couple of matte varnish coats) to help reduce damage from mounting and dismounting the magnetized riders. We'll see if that helps... 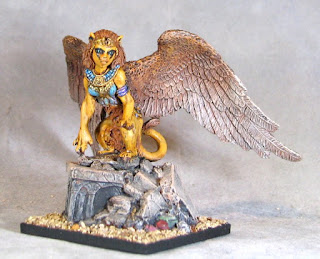 From one of the Reaper Miniatures' Bones Kickstarter comes a really nice Sphynx. 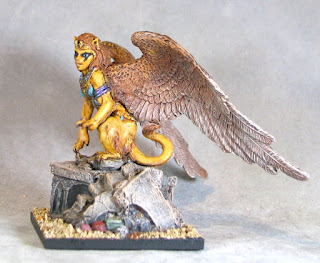 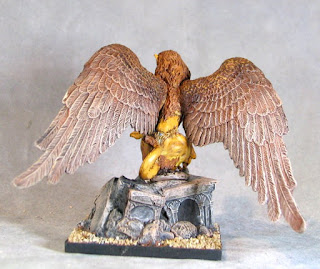 The wings turned out okay, not as awesome as I hoped for, but good enough. 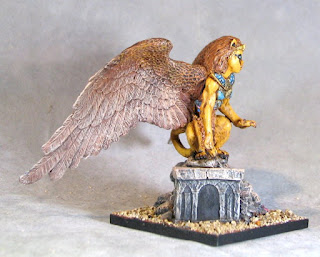 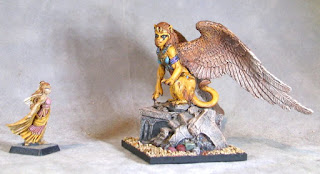 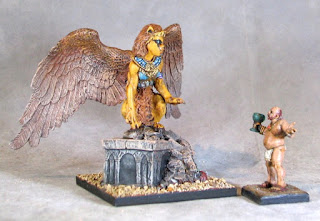 Some more Scroll Pile objectives (original batch HERE) and a couple of Nymphs... 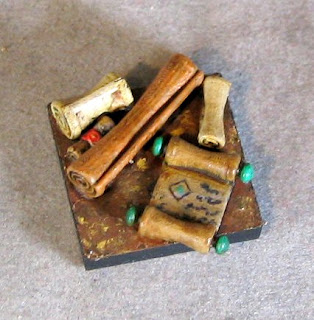 These handy resin scrolls have become a bit of an obsession for me. They're just so fun to put together and paint. 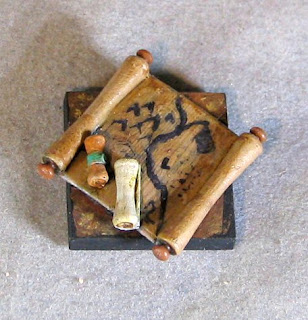 They're useful for most genres too. 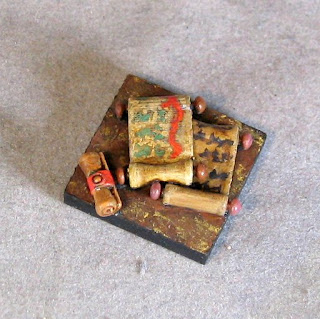 I recently ordered another set of them because I'm running out of the original order. 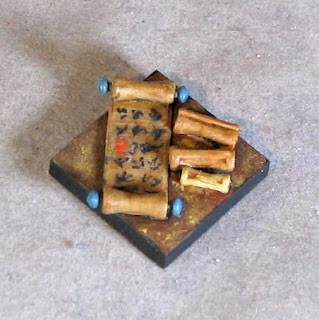 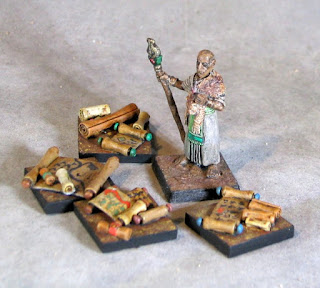 Above we've got a Dark Fable mage consulting the scrolls. Below, a couple of Sebeki Conventioneers look through the latest releases available at SandCon... 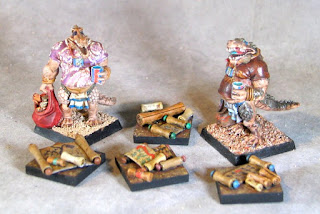 This use of the Bathtime for Bubbles chick from Crocodile Games has been ready to paint for several years now. She's meant to be a water nymph that can be used as an objective marker. She could also fit into a unit of Maenads for my Dionysus warband. 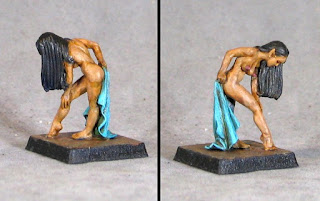 This Hasslefree Miniatures Titania was a must-have for the unit of Maenads.

Long had she sat unbased in a box until last years' preparations for GenCon and the WarGods event. She didn't get finished in time for that, but now she's ready. That leaves one less mini to worry about the next time I need to get a Warband together for a game of WarGods... 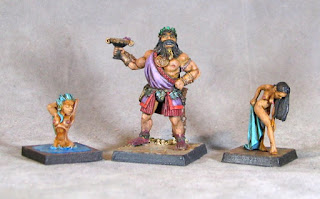 Above we've got the nymphs with the Demigod of Dionysus. Below the nymphs are with the beautiful Helen. 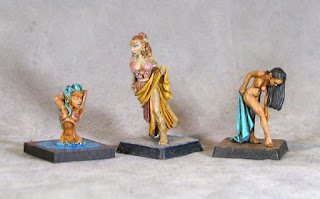 Posted by Clarke at 1:27 AM No comments:

Some Children of Bes (Daneg), the dwarf god of ancient Egypt, and the first Amazon Raider as WarGods Minis Month 2020 rolls on. Again, the WarGods Minis Month is not based on a calendar month but is a more amorphous measurement of time fit for the gods...

The Children of Bes (Daneg) are Swamp Goblins from the old Chronopia line of miniatures from before the turn of the century. I decided to use some that I already had painted up as Asar stand-ins for a warband to be used in a WarGods World Campaign. The unit of spears was filled out nicely but there was a single spearman left unpainted at the time.

Then I decided to do up a unit of the Swamp Goblin Blowpipes to use as either archers or slingers (since there are no rules for blowpipes in WarGods and the options give some points flexibility). I only got a few of the missile unit painted up, this guy was lucky enough to be with the spearman when I started the WarGods Minis Month. He started out as a loading blowpipe pose- I added the top of a Crocodile Games Asar standard. It looks almost natural. 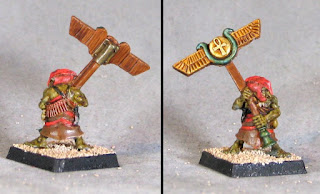 Finally, the drummer is from a Swamp Goblin heavy unit that I just thought would do well as a generic musician for either unit o the Children of Bes. The bone armor is from some unknown source. 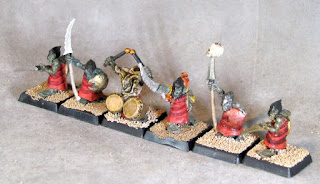 These newest additions to the Daneg units needed to match the originals that were painted over 10 years ago. I think the drummer's look let's him easily fit into either of these units.

Below we've got a couple of the Crocodile Games Asar Spearmen to show just how tiny these Children of Bes are, but they're feisty. 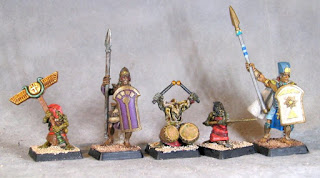 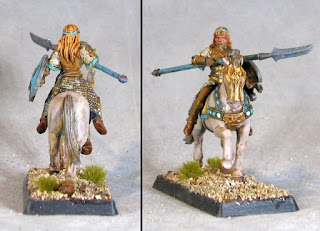 From Crocodile Games, FINALLY one of the Amazon Raiders is done! She'll act as the unit captain. She's the only one that wasn't removed and given a magnet (she's on there really tight, I don't know how I got her to stay so well, but I'm glad). 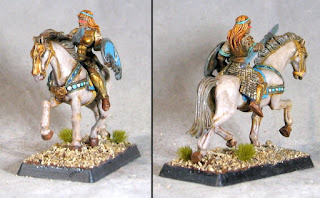 I wanted a light grey for the captain's horse and the rest of the unit will have darker colored horses. 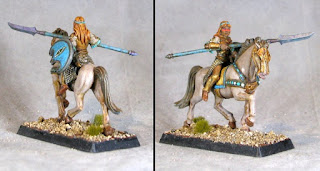 For the lance blade I used some color-shifting blue metallic paint because I've come to really like how it looks. The warpaint was a last minute decision because I kept messing up her eyes when I tried to fix them so I said "screw it!" and went with the red line.

The shield turned out okay, not quite what I was going for but it will do. Of course the rest of the unit will probably have totally different shield colors because I often cant'stick to a uniform color scheme. 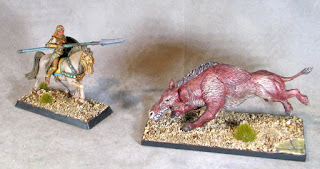 Here we can see just how big that monster skullpig is from Forge of Ice. My money's on the Amazon. 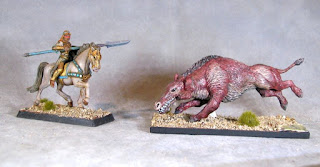