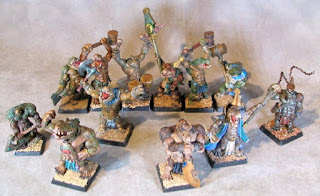 Welcome to the second of my attempts to get new and better pictures of some minis that were painted long ago. This time it's the children of Sobek known as the Sebeki! The group shot above is actually missing two of the Sebeki Conventioneers, but I'll give them their own archive post later on. Also missing is a Beloved of Sobek because I sold off my original painted version years ago- I have anotehr copy that I need to get around to painting because it is such an impressive figure. Above is the only unit of Sebeki I've got, since they're so big and ready to rumble the minimum unit size is 6. 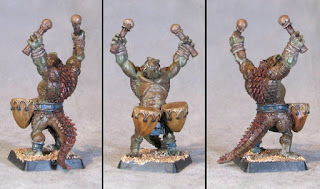 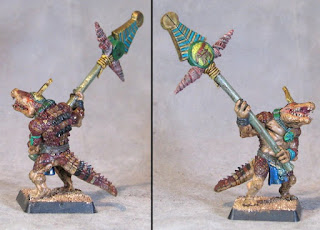 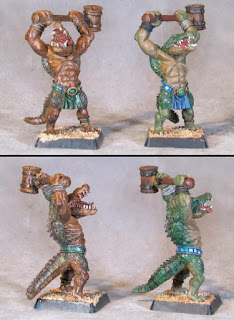 These two guys are, obviously, the same pose but with different heads and different color choices they've got their own personalities. 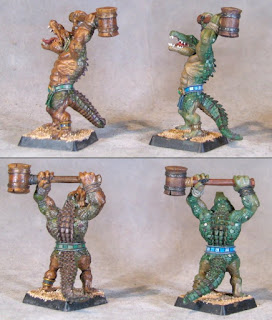 Above we have another of the Sebeki Hammerers and below is a conversion of the hammer to an axe (I think it was a metal bit) to give the unit a little bit of a mix of weapons. 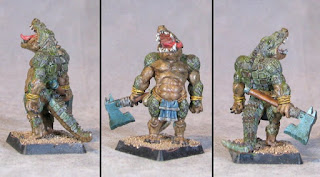 Below is the Champion or Captain for the unit. I'm pretty sure the axe head is a plastic bit from somewhere (probably GW). 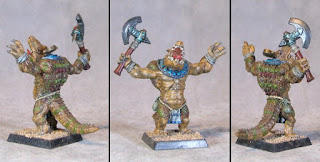 One of my favorite Master of Words minis from the Wargods range. I swapped the gharial head for a normal croc head (I actually used it on one of the Sebeki Conventioneers because it seemed more geeky). 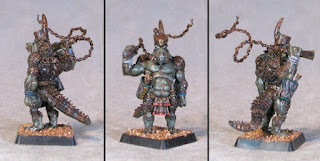 A converted Sebeki Hero, this is the famous adventurer Crocodiliopolois Hotep. He was an entry in one of the painting contests at a GenCon years ago and won a prize (third out of 3?). 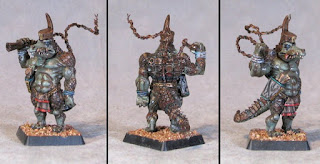 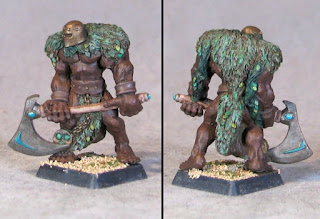 A bonus figure that goes with the Sebeki as an Asar City Dweller Hero of Crocodiliopolis dubbed the Guardian of the Nile. This is a Chronopia Sons of Kronos mini that looked like he'd fit in with the Sebeki pretty well. 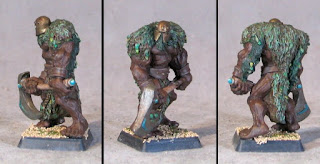 The 5th Anniversary Crocodile Games Mascot who has seen action on the tabletop as a Priest of Sobek and a Chariot Driver.

One of my favorite Crocodile Games miniatures saved for last, the Sebeki Hero. This is the second of this guy I've painted up (the first went off to eBay because I thought I wouldn't have any need for Sebeki). This time I swapped out his big mace for the impressive kopesh.

There are more unpainted Sebeki minis languishing in a box somewhere that will eventually get painted. I even have a female Asar that would be awesome as a Harbinger of Sobek who will definitely fit in with these guys.
Posted by Clarke at 8:33 AM