Sadly I didn't get a picture of the Warband fully assembled on the field of battle, but I did show some of the units as they got finished earlier in the process. I thought it would be fun to show off the other units as they appeared on the tabletop to give an idea of how impressive a full warband looks (even with one unfinished unit) even with my meager painting skills. 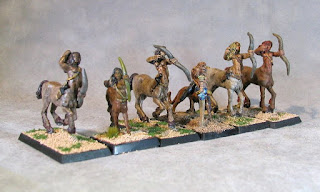 First, the completed unit of Amazon Outrider stand-ins. These are all Foundry minis except the really small one (Reaper) and the one with the lioness body  and sword in the ground (converted). 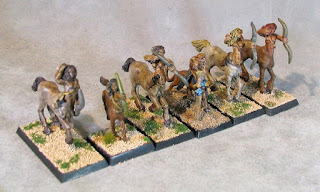 The Outrider Champion was painted up as the Harbinger of a still-unfinished Heru warband for Aegyptus. I wanted an Aspect of Defendrix because I like female minis and it was a challenge to figure out what to use. The lion body is an old Ral Partha lioness or panther while the Crocodile Games "Bathtime for Bubbles" is the Asar female body. Sure she's a little cheesecake, but she looks really good, if I'm allowed to say so myself 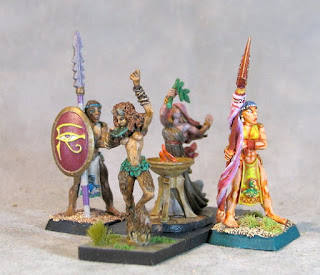 Next up, the War Altar of Dionysus! I'm going to convert something up with actual altar bearers and guards, I'm just not sure what all I'm gonna use for it yet- probably some Dark Fable minis. 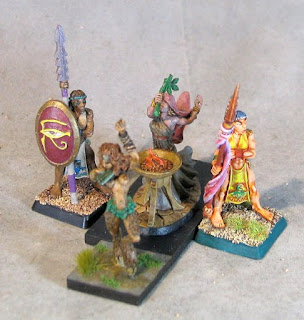 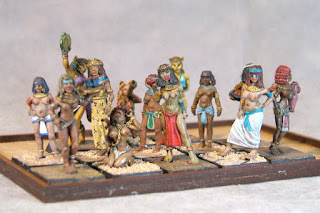 Next, the Maenads are now my favorite unit for Olympus, even though I didn't get them to go to their full potential in the battles. I need to get some more minis painted up to fill out this unit. I'm not sure if I'll convert them or use some civilian females that I've got. Since I didn't get all the intended minis painted for the event, I filled in with some stuff from all over the place. 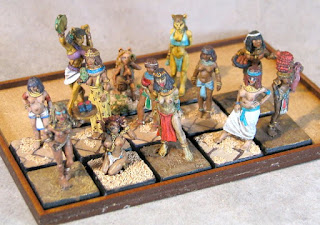 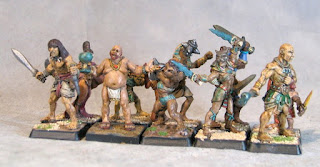 And here we have the Cretan Pirates. I used a mix of several manufacturers since there are not official Crocodile Games minis for these. I've converted a couple of Asar figures to have 2 hand weapons but they didn't get painted before GenCon- I plan to convert up more for the official unit because I really want to use them again (not just because they give you a slot for a Minotaur). 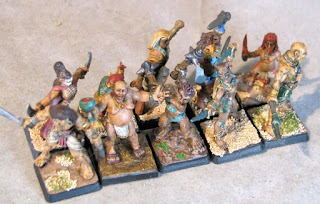 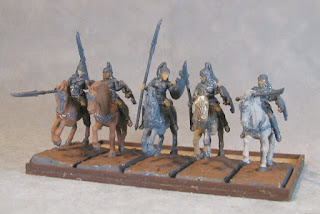 Finally, the Amazon Raiders in all their partially-painted glory. These minis are excellent and I can't wait to finish them up. First I need to get some magnets in them to make transport less of a hassle and reduce bent lances. I have removed them all from their mounts and they are ready for the drilling process to begin... 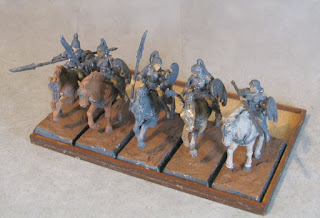 These are by no means complete battle reports- the pics of the minis aren't even that good because I was just using my cellphone camera. Just a general overall idea of the action and how my Amazon Warband of Dionysus performed. I'll try to include as much detail as I can recall, but most of my characters were not named and there was nary a Tethru Scribe or Epic Poet in sight... 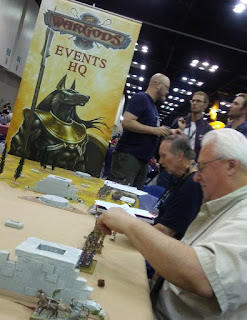 The WarGods convention banner- it's been too long since I've seen it in battle...

My final warband build consisted of:
This first battle was against Cathy's newly painted Corinthians of Apollo (I think). She had a couple of phalanxes and a unit of peltasts from Corinth, a Mycenean phalanx, a paymaster and a couple of heroes. 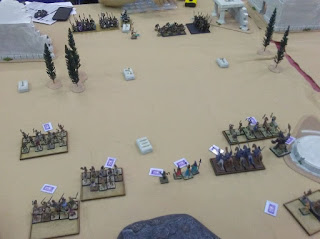 My units are the closest ones in the picture- from left to right: the Satyrs out ahead of everyone since they did not get too drunk the night before and showed up on time; the Cretan Pirates are the furthest back; the wild-eyed Maenads; Mother of Serpents (I really like her poison snakes and her awesome healing); Absynthia with her Bodyguards; the Amazon Raiders (a disgrace because they're not fully painted); the Amazon Outriders (using female Centaur archers as stand-ins); the Minotaur; and finally the War Altar which should probably not get into any type of battle situations. 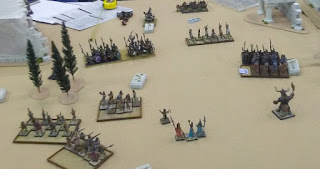 Some action on the right with the Outriders causing Cathy's peltasts to evade away from the battle. Also on the right, the main meatgrinder of the battle- my Amazon Raiders getting stuck in with the Mycenean Phalanx. This wasn't the best use of the Raiders but they got the special divine brew bonus from Absynthia at teh start of the battle and I haven't really played for 7 years or so... 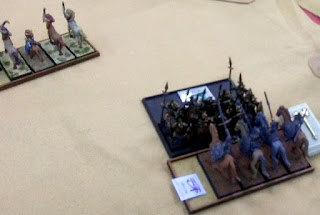 A closer view of the meatgrinder. It was a struggle for much of the battle. The Raiders would probably benefit from a champion in the unit. 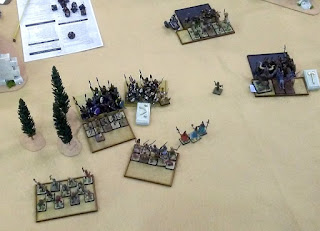 More carnage across the battlefield! On the left, the Maenads vs one of the Corinthian phalanxes. Sadly they never outnumbered the Corinthians to be able to use their frenzied ability that would allow them to wrap around the unit and get an extra attack- thus I will be tweaking the unit to have more devotees for future battles. On the right the Outriders got stuck in with the Corinthian peltats so that they couldn't move around and cause any trouble to my other units. Also, on the far right, the Raiders were joined by the Minotaur (great idea, send the monster in to fight the phalanx from the monster-hunting City State!). 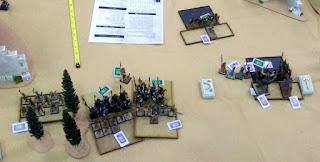 The carnage when we finally called the game sometime around turn 8 or 9. Cathy's Demigod managed to get the magic weapon in the center (the units from both sides were reduced significantly from the scrums there). On the right both Amazon cavalry units were pretty sorry looking but their enemies were also hurting. The Mother of Serpents was a big help killing the Paymaster. Absynthia didn't do much but look pretty- I need to go through her powers and do some tests before I next play.

For the next game, my opponent was from the Frozen North! Neither of us could believe that we hadn't played each other before, but I'm pretty sure that's right. 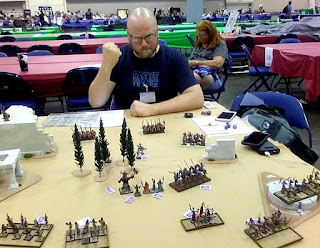 Alex, of Forge of Ice, was playing the Crocodile Games' studio Spartan Warband because he had not intended to play but was bribed by someone. The Spartans were led by a Demigod of Zeus and their units were very vanilla (no fancy mythical beasts or anything exotic). The objective of this battle was to rescue (or capture) the Priestess of Eris- she was in the copse of trees in the center and Alex's demigod got to her first. Since his Demigod was Spartan AND of Zeus, he won the edge almost every turn... 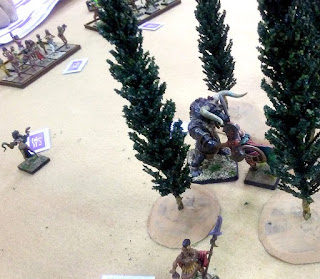 The Minotaur and the Demigod of Zeus clash in a mini-provocation as the Mother of Serpents closes in. Alex had gotten a magic weapon in the previous battle that did an amazing 4 wounds* for every wound it did! 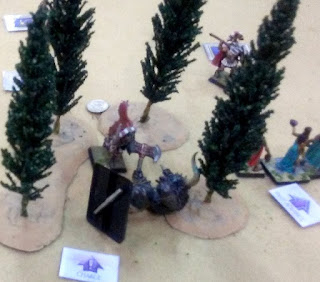 Oh no! the heroic Minotaur goes down because of the 4 wound* causing magical weapon. What will Absynthia's Warband do?!?!? 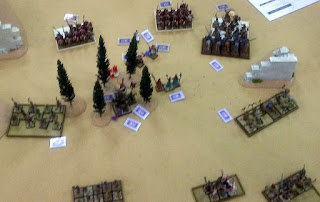 *Fitz came by and corrected us on the power of the magical weapon- it actually just had a damage modifier of 4, BUT if it wounded it COULD cause an extra wound. So the Minotaur was safe and still in the fight! The main focus of the battle was the Minotaur and Mother of Serpents versus the Demigod of Zeus- the onyl other major piece was control of the Priestess of Eris (which Alex kept getting because of his high Edge rolls). 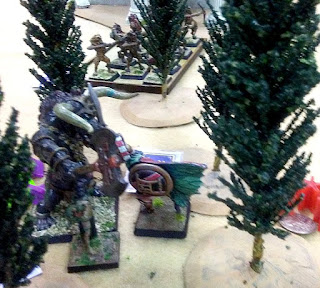 The climactic clash between our Amazon heroes and the Spartan representative of the Patriarchy! I think it was turn 6 and Alex won the Edge again (but he only got to activate 1 unit because it was closer than the last few turns). He chose to activate the Priestess of Eris to get her closer to his table edge- focusing more on the scenario objectives. That's cool, because my Minotaur was able to whack him since I had the next activation. It was almost midnight and all the other games were done, so we called it since it was highly unlikely I could have gained control of the Priestess of Eris. Absynthia had been wounded when one of Alex's nearby phalanxes threw their spears because that's something that cost him a game waaay back in the battle for Ankhara. It was a surprise. 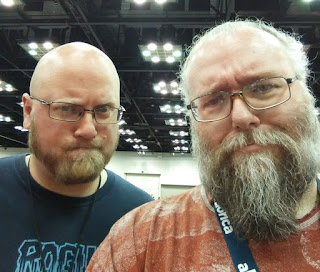 Nobody was happy with the outcome OR we were just messing around after a looong evening of playing our favorite game again after such a long hiatus...
Posted by Clarke at 11:25 PM No comments:

Dionysus Warband Build Part 5 - Wrapping Up For the Game!

Not all the minis I wanted to get done for the WarGods event at GenCon, but pretty close (I'll be focusing on finishing up the mounted Amazons later this month). 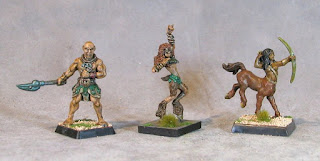 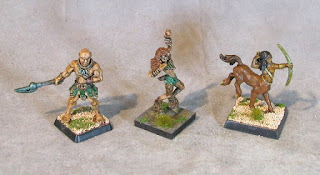 First up, from Dark Fable, filling a slot as one of the Cretan Pirates we have a Pharaoh's Champion. He's armed with a mace-axe and pulling a fancy dagger from his belt.

Next is a Reaper Female Centaur archer to join the rest of the proxies as Amazon Outriders. I know she's only on a 25mm base but a 25x50mm just made her look way too small. She'll be used as the first casualty- if there are any casualties of the unit... 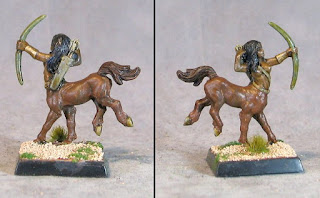 Finally, another Reaper mini. I've wanted to paint up this Female Satyr for a looong time and this Warband gave me a solid reason. I'm going to use her as the Priest for the War Altar because of course a Dionysus War Altar (for an Amazon Warband)would have a female Satyr leading it. 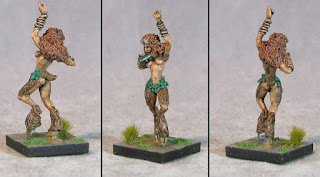 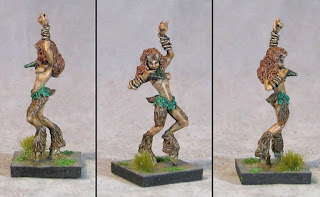 Posted by Clarke at 9:28 PM No comments: