The proverbial clock ticks closer to the GenCon WarGods event deadline and paint is flying in a mostly controlled frenzy.

A mixture of Cretan Pirates, Amazons, and the last 2 Satyrs! The Satyrs will go first, since their unit is completed now.

And the completed Satyr unit with the lil' Champion Satyr. 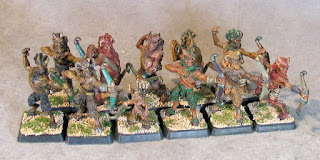 Next up, one of the "Cretan Pirates"- this one from Dark Fable. He's a barbaric looking guy from Cimmanomeria, or somewhere... except Egyptian-ized.

Next, another "Cretan Pirate"- this lady has been rattling around in the unpainted lead storage for years. From Reaper, this Dwarf Barbarian had a huge chunk of metal as the integral base. I hate those kind. Until this push to get a bunch of stuff painted I would always put her back before trying to hack the base off so she can fit on a 20mm square base to rank up with other minis. She was originally intended to be an Aegyptus character, and that's how I painted her here.

Finally, the Amazons Bodyguards for our esteemed Absynthia, Demigoddess of Dionysus. 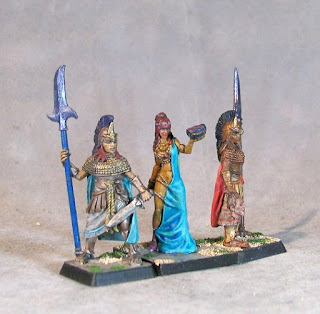 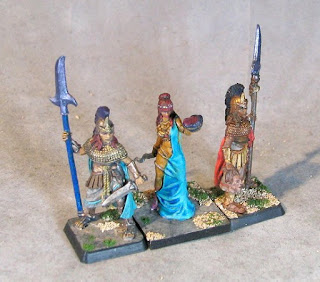 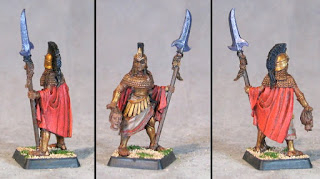 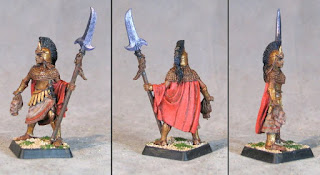 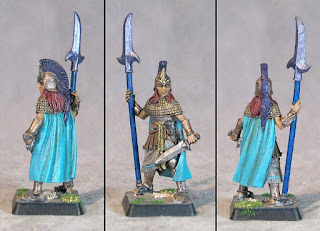 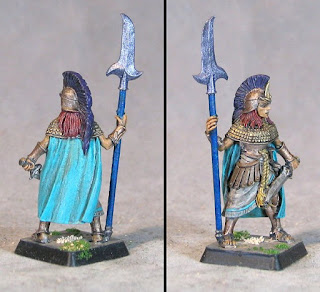 Still a lot of stuff to finish up. I'm pretty sure I'm not gonna get all of the Amazon Raiders "done done" but they're going to have lots of paint on them and they'll look okayish on the tabletop. Horses are a little daunting...
Posted by Clarke at 6:24 PM