Long ago I used an image-hosting service that had all the WarGods (and other) miniatures I had painted from the beginning of time. About 10 years ago that image-hosting service changed hands and all my stuff was lost in that transition. But I've still got the minis and I've decided those older miinis should be photographed again with my much better lighting so that they can be enjoyed again and hopefully make me paint more miniatures to fill the various gaps in my collection .

I decided to start with a few Ægyptus monster conversions from the golden age of my output. 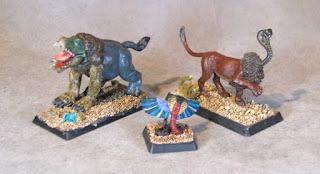 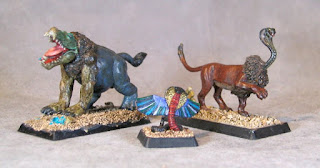 First up, the Wedjet, newest of the 3 monster conversions. This one has actually appeared here before back in Wedjet- Winged Cobra - Olde monster conversion from 2011. The conversion was a simple one but I like to think it turned out as something you don't see everyday.

Next, the half hippo, half lion, half crocodile (it's ancient math!) Ammutbeast! The main body was supplied by Chris Fitzpatrick and came from Monolith Designs. We both agreed that the original head was a little wimpy so it got a head from one of the Crocodile Games Sebeki (the hero/character 'the Butcher'). My favorite part of this figure is the broken canopic jar with the bright Ka juice oozing out. The Ammutbeast has a little taste of the Ka juice on his tongue. 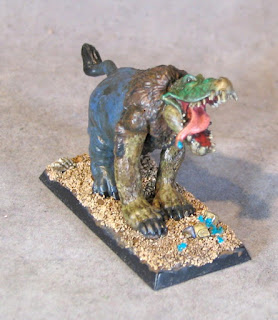 Finally, my favorite of all 3, the cobra-headed lion known as the Apophisphinx. Another simple conversion- just a Crocodile Games lion with the head removed and replaced with a cobra. The green stuff work on the mane is not great, but the overall figure is still something I love to look at.

I guess I had forgotten that all 3 of these monsters were converted because of the the Croc Tales monsters article I wrote. The article came about because of the limited choice of monsters for the Lair of the Monster sub-plot for games of WarGods.
Posted by Clarke at 9:32 PM