It usually helps to have a deadline for getting miniatures painted. What better deadline than GenCon 2019 for the Arsenal of Ares WarGods event! The sad part is, I've neglected painting the mounds of WarGods of Olympus stuff from the Kickstarter and after. Sure I could run an Aegyptus warband (at least a half dozen options for that- not counting the Eater of the Dead options) but I wanted to try something new.

So I came across the Dionysus entry in the rulebook and decided that would be cool- with Amazons. Since I've already got some Satyrs painted there was a good start. But I needed a female Demigod to use Amazons... luckily I had the same thought last year while painting the male Demigod and looked on ebay for some options. More on the Demigoddess later.

Above are all the already completed minis I felt would work for the Dionysus Warband. Below we have the aforementioned Satyrs. I thought there were more of them done. We have the champion and 6 archers. I've decided not to go with a musician, so I'm going to need 4 more of these guys to complete the unit. 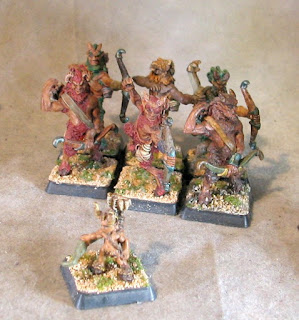 Below we have a Foundry centauress who will be part of the Amazon Outrider unit (along with 3 more that are partially painted). To finish out the unit I'll get one of the Croc figures together and another for the champion. 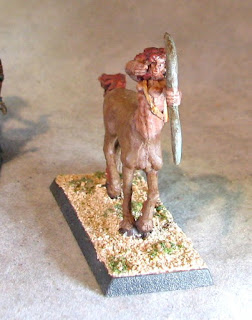 Below we have a Minotaur (he may be swapped for the one with the stone flail) and 5 minis to represent Cretan Pirates. I'm going to need 12 total, so that's going to mean some raiding of other Aegyptus minis and some other ranges to get the rest of this unit done. 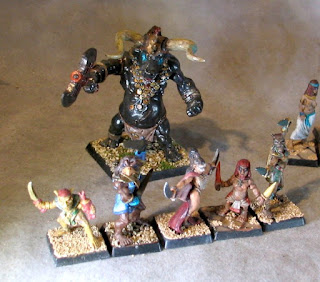 Another draw for a Dionysus warband was the Maenads. Sadly there are no official minis for them, ut I have several Dark Fable minis that I think might work as stand-ins. Only 5 seemed suitable enough for this task so another 9 to flesh out this unit. 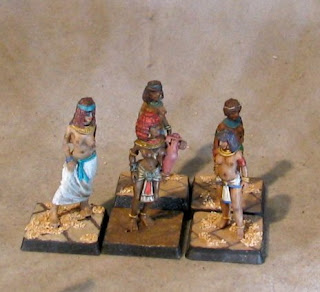 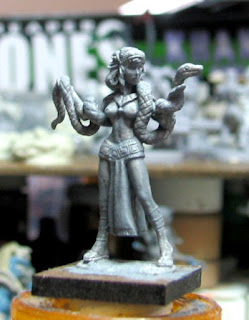 One of the character slots will be the Mother of Serpents. What better choice than one of the Forge of Ice Serpent Priestesses? 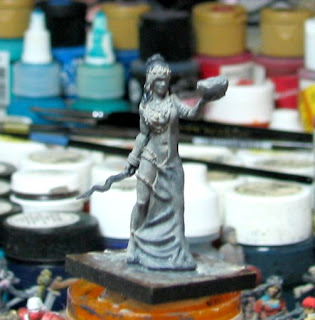 Finally to the Demigoddess! I came across miniatures from a Kickstarter Mythic Battles: Pantheon and this Circe figure looked like a good female Demigoddess of Dionysus because of the cup. So there she is- now I have a reason to get her painted up.

The rest of the Warband will consist of some Amazon Raiders (a unit of 5 from scratch), possibly an Amazon peltast unit as reinforcements (10), 2 Amazon Honor Guards, and some alternate choices depending on the whims of the fates. All that before GenCon will be an exiting painting journey.

Updates to follow.
Posted by Clarke at 5:41 PM No comments: