Some delay because of illness and sporadic paintng time, but WarGods Minis Month is still underway! 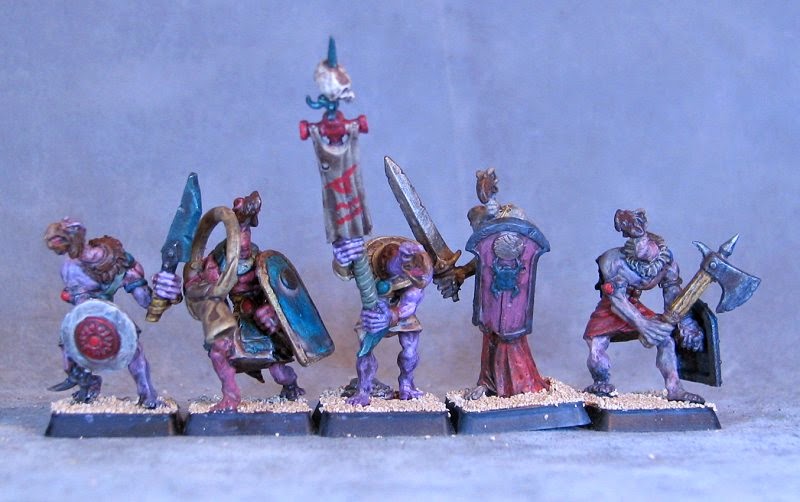 The idea for this unit of Nekharu with hand weapon and shield has been an open project for quite a long while. I had already done the first 2 conversions a few years ago. With WarGods Minis Month underway I decided this was as good a time as any to get some more of the conversions together to start filling out a full unit of these nasty vultures...

Most of the figures in this batch are conversions of the  Nekharu with mancleavers, the exception is the taller one that was a Nekharu Coven Witch- he lost his left hand to another conversion long long ago and so I decided a shield would be an easy fix for him. His right hand got a sword from one of the weapon packs. 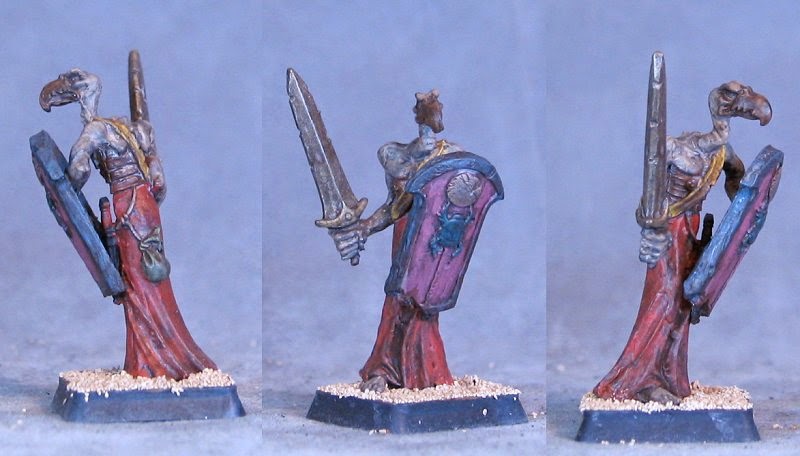 These next two are from the same base model. I snipped the long handle of the mancleaver on the first one and gave him an Asar round shield on the right arm leaving the rest of the mancleaver in the left hand. Then I carefully trimmed down the curved top of the mancleaver blade so his sword was a shorter straight weapon.

For this one I took the mancleaver off altogether and gave him a shield on the left hand and a plastic GW axe in his right.

The musician is sporting a Wood Elf plastic horn and arm- not the best conversion ever but it's not bad. He's also got one of Alex Bates' Egyptian shields.

The standard bearer kept the handle of his mancleaver and I pinned a pre-ragged Tethru backbanner to the end. Other than the little skull scarab on his base (thanks again to Alex!) to help him from tipping over, that was the only change to him.

And here we have the 7-man strong unit waiting for at least 5 more to join them before the Paladins of Despair will be a worthwhile unit on the tabletop. But for skirmish games...

Posted by Clarke at 7:49 PM No comments: