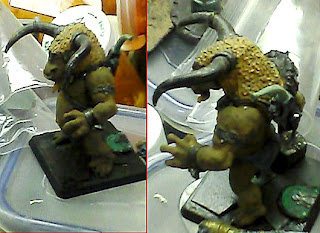 Yes, a slightly converted Olympus Minotaur figure. Crappy pics but I don't want to give away the whole thing at once.

The 'Epic of Menthu' written by SHefdu Sootootma will start appearing in installments soon too. Because Menthu was the character from my latest campaign warband that seems to have captured the hearts and minds of a generation... Or maybe just a few people thought the idea was cool, either way I'm doing it!
Posted by Clarke at 9:07 AM No comments: