The Yembic Lions were first encountered by King Yemba of Pteronia. These formidable beasts caused much destruction to Yemba’s army before they were scattered by his Amazonian allies. Scholars dispute whether the Yembic Lion is actually a type of lion at all. It is clear that it is a monster of some sort released from Pandora’s Box. Now they seem to be multiplying and spreading throughout the world…
MV   WND   #ATT   ATT   DEF   ARC   DISC
_7____4____3_____7____6____7_____7__
Base 40mm Square
Claws & Fangs   DM 2
Thick Fur   AR 3
Paralyzing Glance- At the beginning of the Yembic Lion’s activation that it is not engaged in melee, it may target any single model (even if the target is the member of a unit) within 20” with its paralyzing glance. This is an ARC vs ARC test. If the Yembic Lion is successful, the target is incapable of any actions for D5 turns (no Movement, Attack, Defense, etc.). Targets who are members of a unit are left behind if the unit moves away.
Lashing Tail- During melee combat the Yembic Lion gains one extra attack from its long whip-like tail. The tail has ATT 5  and DM 0.
The miniature I'm using: 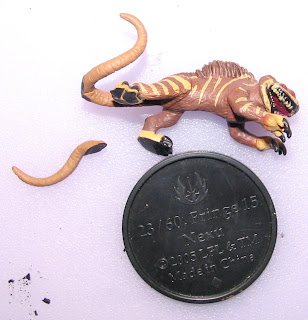 A Star Wars Collectible Miniature- Nexu. I've been meaning to do something with this thing since I picked it up really cheap on eBay a few years ago. The Pandora's Box Campaign gave me the perfect reason to get to it.

I hacked him off the round base and cut a 40mm square base from an old gift card. Since I never really liked the 2 tail look of him I decided to take off the less interesting tail. 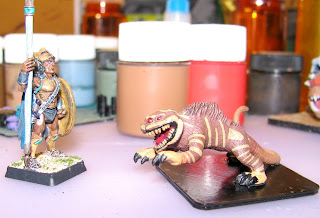 Here he is on the square base with a WarGods mini to help show the scale. 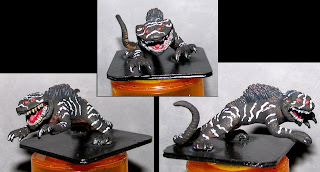 Not quite finished yet, but you get the general idea. I'll post more pics when he's finished.
Posted by Clarke at 9:35 AM